Example of an announcement...announcing...the creation of a legendary artifact: in this case, a glorified millstone.

Dwarves in strange moods will create 传奇神器（legendary artifact）: unique, "named" items which are of unsurpassable quality (and often, value as well). An artifact is the ultimate expression of a dwarf's desires, fears, memories and hopes in art-form, and each dwarf will produce at most one in their lives (or die trying). Dwarves that create an artifact immediately gain enough experience to boost them to legendary level in the affected skill, unless they were possessed.

Dwarves drop artifacts in the workshop as soon as they are made. They can be traded, just like any item of their type, or stolen, sold or warred over, and may transfer between civilizations in those ways. A list of all artifacts in the fortress can be seen by pressing L (l in version 0.40).

Artifacts are normally of extremely high value and quality, and can be used just like normal items of their type; they're therefore extremely useful in any situation where value or quality are important. Note that material and weight calculations still apply, so an artifact sword made of dingo bone, or an artifact breastplate made of gold, are not going to be overwhelmingly powerful.

文件:Holy Grail.jpg
The holy grail, one of the most well-known, symbolic artifacts in the world. Unfortunately not made by dwarves. On the other hand...

Artifact furniture of high value can be placed in rooms to greatly increase the room's value (and hence quality), which can be useful to meet the room quality requirements of nobles. They can also be placed in high-traffic areas of the fort, so that dwarves that pass by (or over) them will get happy thoughts from admiring them. Artifact mechanisms can be turned into levers and traps, which count as furniture.

Certain artifact types (barrels, buckets, mechanisms, etc.) can be used as components in some buildings; doing so will multiply the artifact's effect on fortress value. They can also potentially be displayed on a pedestal or in a display case.

Artifact equipment get a large ×3 quality bonus to their weapon accuracy and armor deflection values (compared to ×2 to masterwork); this is not enough to make totally inappropriate materials competitive with steel masterwork equipment. Also note that while they will be half again more accurate, artifact blades do not have a sharper edge than masterwork items of their material; in other words, their material type modifiers remain unchanged, and they will do no more damage than a regular item of their type (though they will never dull.) (And currently get half the sharpness.BUG #9549)

Artifact weapons (if not being used in the military) can be put into a weapon trap, which will make it count as valuable furniture. 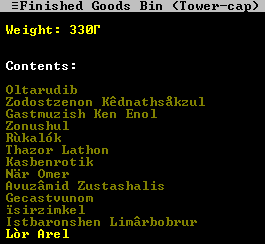 Finished goods are not particularly useful, only adding to your wealth (and all of the things that entails). This bin is clutter for the fortress, valuable only for trading, but any and every thief's dream score, an object of worship for three different kobold civilizations.

An artifact gem is called a perfect gem and functions the same as a large gem, having all the same uses, i.e., none, other than boosting fortress value and trading. Display cases and pedestals can also be used to show off otherwise-useless artifact crafts.

Artifact cages and animal traps are unique, in that they are capable of containing any type of vermin creature without them ever escaping - by comparison, certain types of vermin can gnaw, fly, or immolate their way out of ordinary cages depending on their materials.

Any other art (including other artifacts) that references an artifact cage will mention what animals are currently in it - the artifact quality of the cage makes it capable of magically self-updating in all references to it in the world.

Artifacts can be created in world generation and afterwards:

Once created, artifacts are subject to various claims that depend on the circumstances surrounding their creation: if it's a single person (as opposed to an entity), the creator can keep it for themselves, gift it to their parent entity, or claim it as a family heirloom. This can be shown in Fortress mode, where the artifact creation announcement will also include the nature of the claim: "He/She offers it to <entity>", "He/she claims it as a family heirloom"/"He/she claims it as a family heirloom in the name of the family ancestor <figure>" or "He/she claims it as a personal treasure". On the other hand, if an entity was responsible for its creation, the entity will keep its claim on it (e.g. a religion and its priests over a holy relic, or a library and its scholars over a book).

Example of a dwarf claiming an artifact as an heirloom.

Regardless of their nature or classification, artifacts will then be subjected to the turmoil of the world:

As a player, you may interact with these artifacts in (currently two) different ways:

You may send squads of dwarves on a mission to "retrieve" an artifact from a site. (If the artifact wasn't created by your fortress, it's not so much "retrieval" as "theft".) This includes sites residing outside civilizations, such as necromancer towers containing books of interest. If the artifact's location is not known, you may send your squads off to gather information on its whereabouts.

Note that the site's entity will keep its claim on the artifact you've stolen:

Under the rumour system, artifacts created in your fortress can also become known to foreign sites and civilisations. Some of their historical figures may then lay claim to your artifacts, and plot to steal them.

As an adventurer, you may receive quests to retrieve artifacts. The nature of the quest will be as diverse as the nature of artifacts and claimants thereof. Therefore, the difficulty can range from 'piece of cake' to 'nigh-impossible' (if the artifact was claimed, say, by a demon lord of a goblin civilization). Once you're in possession of an artifact, you may encounter other parties who have laid a claim on it. It is up to you (and the circumstances, e.g. if a third party happens to be well-armed and greater in numbers than yours) to decide which party to satisfy. Alternatively, if the artifact happens to be very useful, such as a strange mood-generated steel sword, you may simply decide to keep it for yourself and leave all troubles behind. Note that completing quests for artifacts will increase your reputation, and flaunting your artifacts visibly in front of onlookers will trigger rumors.

The artifacts' creation history and storage locations are recorded during world generation and can be discovered in Legends mode. Artifact scepters may become symbols of various rulers.

Artifacts cannot be designated for dumping or melting.

Artifacts cannot be damaged by temperature extremes, building destroyers, or fire, although they will ignite and burn as is normal for their material type. They can be lost in pits, carried off the map by flows, stolen by thieves, atom-smashed by bridges, or melted by extreme heat. The loss of an artifact does not appear to affect the happiness of its creator.

In Dwarf Fortress Talk #7, Toady stated that even when atom smashed, or melted by extreme heat (or destroyed in any other manner) the artifact will not be deleted but instead receive a "Hidden" flag, which causes the item to respawn in a random location on the site in which it was destroyed, perfectly unharmed, after reclaiming a fort or visiting it in adventure mode. However, in a Future of the Fortress post he stated "Artifacts being indestructible by default appears to be gone", due to an "utterly destroyed or transformed" flag.论坛贴子

After creation, an artifact cannot be further decorated (by encrusting it with gems, studding it with metal, or sewing images into it) - a pitiful gabbro scepter, for instance, cannot be made more valuable.

Artifacts disappear from the artifact list upon abandoning a fortress. Artifact creation has a wider selection of possible item types for several skills, occasionally resulting in artifact items that could not be made normally, like bone shields or metal beds.

Artifacts and their mechanics were the topic of Dwarf Fortress Talk #7. The future of artifacts was discussed in a separate portion of that cast.

Artifacts can be disabled in d_init.txt

Artifacts created by happy dwarves (i.e. not fell or macabre moods) have a 1% chance to be named after the dwarf who created them.